Air is an excellent side-scroller from premier Taiwan developer Softstar. Despite what the name implies, the game actually takes place underwater most of the time. In contrast to most other shooters that feature futuristic spacecraft and menacing-looking enemies, including most from Softstar themselves, Air takes a decidedly "kid-friendly" approach by replacing baddies with cute-looking monsters like octopus, clams, and other deep sea denizens. You pilot a cute toy craft, complete with the huge winding mechanism in the back. Like all other side-scrollers from Softstar, Air boasts excellent graphics, well-designed levels, and imaginative weapons and bosses. Anyone who enjoys shareware game In Search of Dr. Riptide will also enjoy this obscure old game that sadly was never officially released outside Asia. 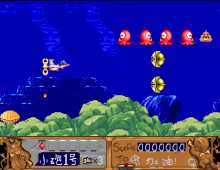