Actraiser is a fun action/strategy hybrid from Quintet/Enix for the SNES. You play the role of a god who is trying to reclaim the earth from evil beings and make it habitable for your people. Similar to EVO but even more so, Actraiser adds strategic elements to the standard 2D side-scrolling gameplay. Each area in the game is divided into two "Acts," with a simulation scene in-between. The "Acts" are standard sidescrolling scenes where you see your alter ego onscreen, wielding the sword to fight monsters. These scenes are fun, with diverse terrain and multiple paths. Where Actraiser really shines, though, is in the simulation scenes. Similar to the planning scenes in The Horde, the simulation scenes is where you view your people's settlement from a bird's eye view. For the settlement to grow, you will have to clear obstacles such as trees and rocks with your supernatural powers such as wind, rain, lightning, sun, and earthquakes. You will also need to destroy monsters that are trying to destroy the settlement. The longer you play, the more powers you will be able to wield, and the tougher the monsters you will face.

Despite a good balance of action and strategy, Actraiser is unfortunately too easy and too short. The difficulty level is quite low, especially if you use a lot of magic, and some Acts are much shorter than the rest. I finished the game in about 8-9 hours, and that's including replaying some portions to see the alternate paths. But still, the fact that it interested me enough to play for many hours straight should speak volumes about the fun factor of this game. If you enjoy innovative and "light" action or "God sim" games or both, Actraiser is well worth your time. It may not be challenging, but it's a lot of fun while it lasts. Too bad Quintet decided to focus much more on the action part and virtually abandoned the superior sim segment for the disappointing sequel, Actraiser 2. 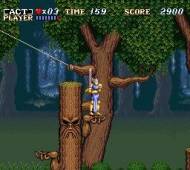