Apple Panic is a very early Lode Runner-style platformer that is not as good as that classic, but merits mention as one of the first platformers made for PC. It is also the first PC game designed by Olaf Lubeck, who would later become famous as the brains behind Frogger.

In Apple Panic, your goal is to dig holes (or fill them up again) to trick monsters to fall in. Once monsters fall in the hole, you must hit them on the head to kill them, otherwise they will bounce back up with vengeance. Monsters on early levels are orange blobs that are easy to kill, but in later levels, you have to deal with green butterflies that require a hole directly beneath them, and purple ones that require three holes (vertically lined up, of course) underneath to trap. You earn extra points if you drop one monster on top of another. To make matters worse, you have a tight time limit to kill all the monsters on each level, and you can be killed at monsters' touch. Each level has a different layout, but always have five platforms you can dig, and five different columns you can use ladders to climb.

If you have played Lode Runner, Apple Panic won't feel any different except for the higher difficulty level, mostly as a result of time constraints and precise-to-the-pixel digging requirement. The game doesn't break any new ground, but it is still a fun little game that will keep you occupied if you think Lode Runner is too easy. 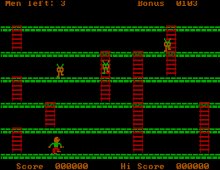