One of the better movie-based games from Box Office, Alf was a budget release game based on the popular 80's television show of the same name. As Alf the good-hearted alien, your goal is to around the neighborhood collecting pizzas while avoiding cats and the man of the household. Not unlike Pac-Man, except there is a lot more to do in each maze. For instance, in some levels you have to find parts to your spacecraft, and most levels are quite large, spanning 2 or even 3 screens. The game is quite challenging, as the cats are very nimble, forcing you to chase them around the screen before they can be caught.

Everyone remembers Alf the alien from Melmac. Gracing our TV's every evening at around 5.30pm =). You might recognise some famous quotes such as "hey Willy!" and "No problem!". And the 'lets eat fluffy the cat' problem that would arise a fair bit. Hehe, I still even have an Alf soft toy at home! This game is based on the TV show (duh), and I happened to think it was pretty groovy indeed.

Basically Alf came to earth in his spaceship, which is a jet scooter. The problem is, he's out of gas can't get home again. There is a pawnshop in this game, which lets him sell stuff and get money to buy some gas for his jet scooter. So his job is to go exploring around and find things to sell to the pawnshop. (I think that they should have named THIS game Thief, don't you ;) Hehe).

The graphics and the sound sadly leave a bit to be desired. Considering this is a 1994 game I would have expected much better. The sound might make you want to slit your wrists, and the graphics are a bit hard on the eyes and make gameplay a tad difficult. But you should still have some fun playing this game. We all love Alf, the one alien that we could be around as kids and not get frightened, (except ET of course, although I'd probably need a clean pair of pants if I saw him face to face at the age of 22 even!) 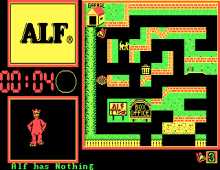 People who downloaded this game have also downloaded:
Adventures of Captain Comic, The, Adventures of Lomax, Airlift Rescue, Air Offensive: The Art of Flying, Arkanoid 2