Simple concept: fly your helicopter to rescue hostages, bring them to the embassy and destroy tanks and other enemy crafts on your way. The game is a remake of the old Atari/Apple classic Choplifter that some of you may remember. Well, there isn't much to say - solid work.

Airlift Rescue is a fun variation of the classic Chopper game of yore in which, manning artillery, you must shoot all enemies that drop from parachutes before they get close enough to you. The game turns the concept upside down and have you fly a helicopter to rescue hostages while avoiding artillery fire. There are 64 hostages in four separate buildings, but the helicopter can only hold 16 hostages at a time. The first group of hostages will be outside waiting, but you must blast open the remaining buildings to free the rest of the hostages. The buildings must be opened in order, from right to left. When you land, the hostages will run and enter the helicopter, and you must fly them back to the American embassy. It takes skill to manage the chopper direction and shooting ranges, but this makes the game challenging on different levels. In short, this is mindless fun at its best! For a more faithful conversion of the classic, try Night Raid instead.

You are the helicopter which has to rescue people which ussually stand around the buildings, but you have to make sure you don't get hit my the enemies. 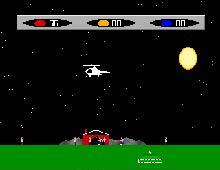