AeroStyle is an excellent freeform aerial combat shooter that sports a very intuitive mouse-driven interface, crisp SVGA graphics, and fun gameplay. Your goal in the game is simply to pilot a biplane similar to Sopwith and kill everything in the sky that moves, ranging from balloons, to gliders and other planes. Your plane moves in a straight line, and you can change its direction simply by moving your mouse around. Then, just left-click to shoot and right-click to perform a nice "roll" maneuver (looks like a corkscrew to me, but I would be hard pressed to come up with a technically correct term for that). The controls take some getting used to, but once you do, it will feel like so much like a second nature that you would wonder why no other plane-combat game uses this method. Best of all, the game plays in a Window, which makes it ideal for a round of quick aerial combat during coffee breaks. 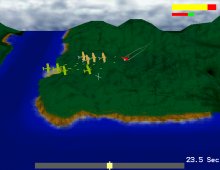