Agent USA is a good Windows remake of the original 8-bit classic game of the same name, released by Lothlorien in 1984. Designed for kids, the game is a fun action game with a bizarre premise. You are a secret agent, and your job is to track down and eliminate the "FuzzBomb," a mysterious creature or object that infects innocent people and turns them into mindless "zombies", who then wander around aimlessly, infecting other people that they touch.

The gameplay is quite simple, but educational at the same time. You move from city to city in the U.S. as you attempt to locate the area that the FuzzBomb has infected. Your only weapon against the FuzzBomb and people who have been "fuzzed" are magical "diamonds". When someone who has been fuzzed comes into contact with one of the diamonds, they revert back to their normal selves (and that diamond is used up and disappears). You start off with 10 diamonds, and you can grow more (yes, diamonds grow in this game) by simply dropping them on the ground and letting them multiply. However, other civilians will try to steal your diamonds if you leave them out in the open, so you have to protect your diamond crop while trying to touch people with them.

The educational part of the game comes in the fact that you need to travel between the cities by train (some cities have express trains). In the process, you learn where various U.S. cities are located on the map, and you will also learn which ones are the state capitals. Okay, so this may sound like saying Railroad Tycoon is an "edutainment" title because it's got a U.S. map, but hopefully you get my drift. Even if kids won't learn more than city names in this game, at least they'll be having fun ;)

There are several neat things about the game, beyond the bizarre premise and fun gameplay. For example, the game doesn't end if you get "fuzzed" yourself (which can happen when you get touched by a zombie with zero diamond left). You simply lose all control of your character, so you'll watch him wander aimlessly from city to city like all of the other civilians. If you wait long enough, you may actually gain control of your character, because some of the civilians who carry diamonds as well may come into contact with your agent. Pretty neat.

True to the Commodore 64 original, people in this game look like big cowboy hats with little legs sticking out underneath. Your character wears white hat, and all civilians wear black. All in all, Agent USA may not be the best game ever made, but its original premise and gameplay will probably keep you entertained. This version is shareware - you can only travel 10 times before you have to register the game. But for only $2, it shouldn't only be a big decision to make ;) Recommended, especially for the young ones in your house. 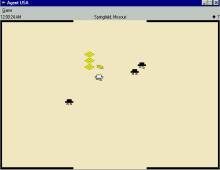