Advanced NetWars is a little-known sequel to NetWars, a great 3D space shooter that Novell bundled for free with their Personal NetWare program to show off IPX capabilities. Caldera upgraded the game with better graphics and more features, then released it as part of its OpenDOS application (long discontinued).

Overall, this last version of NetWars looks and plays better than the original, and is very addictive in multiplayer mode via IPX protocol (although the single player mode is quite fun too, with decent computer-controlled pilots). I especially like the innovative "3D radar" that shows ships' distance from 2D plane - this predates Homeworld by many years. If you like the original NetWars or space combat games in general, Advanced NetWars is a must-have.

Note: The download here includes an IPX wrapper program you can use to connect to Kahn Central to play a multiplayer game. 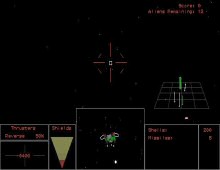