Both the graphics and sound are quite bad and they need to be better in order to have people find a game like this interesting simply because the huge competition in this genre. Nothing new is seen in the game and because of the fairly simple gameplay in the game it just doesn't offer much at all. In my opinion the developers should just had let a game like Action Fighter stay as a arcade machine game only as this game is suited well for game machines like this - but not regular home computers.

Action Fighter can't be recommended simply because it doesn't offer anything you wouldn't be able to get from both older and newer arcade games. If you remember it from an arcade machine its fun to see how the PC version is though but that's about it.

Core Design's computer conversion of SEGA's top-down shoot'em up Action Fighter for the Sega Master System and Mega Drive. Actually quite a good conversion of this fun little game. In Action Fighter, you start your mission as a motorcycle and must collect power-ups in order to become the Porsche, and finally the flying Porsche/Jet-fighter. In addition to this novel concept of driving & flying combination, Action Fighter also contains very challenging end bosses on every mission. Your mission orders come straight from the president, lending a bit of (albeit fake) urgency to the game. Overall, a mostly challenging, fast, and enjoyable oldie that's one of the better PC versions of console games. Recommended. 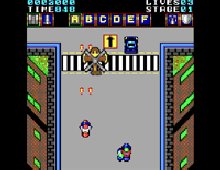