Developed by Denton Designs, the eccentric makers of Spectrum classic The Great Escape, Where Time Stood Still is a fun action adventure game that sports a much-improved engine used in the earlier game. In a plot that predates Michael Crichton's Jurassic Park by a few years, Where Time Stood Still casts you in a role of Jarret, the down-on-his-luck pilot who just crash-landed in a mysterious forest along with his three passengers. Now you are responsible for taking them out of this prehistoric hell-hole, and only one thing is certain - it's going to be no walk in the park.

The game, similar to The Great Escape, is played from an isometric perspective. In addition to the innovative action/adventure gameplay of that game (e.g. you must try to keep the health meter full by avoiding or killing obstacles), Where Time Stood Still lets you control all four characters. Jarret is a he-man all-rounder. Athletic Cambridge scholar Dirk was recently married to Gloria, a tough cookie in a fragile frame. And then there's Clive, an overweight businessman and Gloria's father, who's about to learn the hard way that his credit card is meaningless in a jungle. Each of these characters has their own uses, not the least of which is the ability to carry up to four objects, one of which is a bag which can hold a further four. You'll need to exploit each character's strengths to bring everyone home safely. For example, Dirk is a great help providing Gloria survives, but if she dies, he becomes a hopeless fellow, lost in sadness.

For such a vast and complex adventure, the game interface is remarkably simple and user-friendly. You only need the four direction controls, plus fire to make the character run (although this is not very useful, as running can leave all the other characters behind, who won't ever think about following your example). There are a!so two menus: one to select characters, and the other to control their inventory. Although the graphics (in 4-color CGA) is nothing to write home about, it is adequate. The game's biggest problem is that you can't save a game, which means you'll spend a lot of time repeating the early stages when you make a fatal mistake. But all in all, Where Time Stood Still is definitely a great old game that deftly combines action and adventure elements into a fun real-time adventure. The game is much better known on the Spectrum computer, but this PC version deserves as much attention. 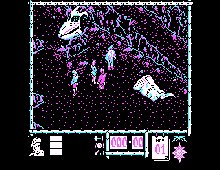