Palace of Deceit: Dragon's Plight, The

The Palace Of Deceit: Dragon's Plight was the first release of one of Epic Megagame's lead game designers, Cliff Bleszsinski. He released it in 1991 as a shareware title under his self-owned game company, Game Syndicate Productions. Though the game never received much recognition among the thousands of other shareware games released in the early 90's., it is what got Cliff Bleszinski his job at Epic Megagames.

Back when the game was first released, Cliff, about 17 at the time, sent a copy of it to Tim Sweeny, the owner of Epic Megagames, whose shareware puzzle game with ASCII graphics, ZZT, was very popular at the time. Tim liked Dragon's Plight so much, he offered Cliff the opportunity to create another similar graphic adventure under Epic Megagames. Of course, Cliff took the offer like any other amatuer game designer would. His second title, Dare To Dream, was released by Epic in 1993. The game became fairly popular at the time, and Cliff has been working for Epic ever since. He has designed several other games since then including: Jazz Jackrabbit 1 & 2, Unreal, and the very popular Unreal Tournament.

You're probably wondering how this shareware game got Cliff where he is today. Well, it's challenging, fun, and higher quality than most shareware games of 1991. It's a point-and-click graphic adventure for windows similar to Shadowgate and Deja' Vu. In it, you play Nightshade, a dragon being held hostage by the evil wizard Garth who wants to exterminate all dragons in the land of Salac. The only way he can do this, however, is to find the secret Land Of Dragons. It is hidden in a valley and only a dragon would know where it is. He plans to torture Nightshade until he reveals the location of his fellow dragons.

But you, as Nightshade, have different plans. You find a way to sneak out of your jail cell and into Garth's Palce Of Deceit. The palace is full of puzzles, and traps are around every corner ----- that evil wizard wants to make it as hard as possible for you to escape. Along the way you meet several whimsical characters, like Darm the rat and Budo the giant snail, also trapped in the palace, who are more than willing to help you escape. Even with their help, however, it will still be very difficult to make it out alive. You'll have to defeat Garth's warriors, and even the wizard himself, in order to escape.

The Palace of Deceit: Dragon's Plight, is a classic graphic adventure. Even if you didn't like Cliff's later Dare To Dream, you may like this game. It features a completely different atmosphere, storyline, and puzzle design. The graphics aren't all that bad for their time, but unfortunately, the game has no music or sound. However, the challenge should be enough to keep most gamers happy. It is very rare, and of course, you can no longer purchase it. So check it out and see what got Cliff Blesinski started on his career of designing games. 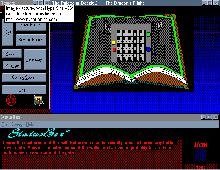 People who downloaded this game have also downloaded:
Peasant's Quest, Perils of Poom, The, Realms of The Haunting, Lost Files of Sherlock Holmes 1 (a.k.a. Case of the Serrated, Shannara