Realms of The Haunting

Realms of the Haunting is one of the best, if not THE best, occult games ever, featuring an outstanding, well-told story that evolves from the haunted-house cliche to a fascinating interplay of good and evil, with many plot twists. The game, powered by the improved version of 3D engine used in Normality, is a mix of action and adventure that, for once, truly appeal to fans of both camps. Puzzles are logical despite frustrating hunt-the-pixel annoyances, and the acting is above average. Horror fan or not, you won't be disappointed with this 4-CD epic. Highly recommended. 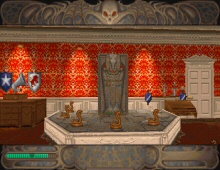 Realms of The Haunting screenshot