Perils of Poom, The

One of the better and longer amateur adventure games in recent years, The Perils of Poom is a funny, atmospheric, and well-written freeware adventure game. The review at Adventure Gamers does a great job of convincing adventure fans why they should play this game:

"Perils of Poom, by Michael "-M-" Evans, is set in a dystopian future where space travel is the norm. Crime is at an all-time high, and drug use is rife. The game is a unique mixture of the serious and truly hilarious, every stage of the game kept me riveted. The puzzles, for the most part, aren't especially difficult, but there is the occasional brain-teaser that will tax you.

The game begins on an ordinary day in the life of a young man named Mac. He's late for work (as usual), and once again his boss chews him out when he arrives. This time he is down to his last warning. When things couldn't get any worse, two of Mac's colleagues lock him in the break room just as Mac is due for a staff meeting. Mac eventually manages to escape from this makeshift cell, but too late; Mac is fired, and left looking for work. Mac isn't long out of work, however. A mysterious note is pushed under his door that reads '"find Mozez." Mac finds Mozez in a drab, run-down part of town, and it is here that his adventure truly begins. Mozez wants Mac to find the source of Pure Poom - a hugely popular, not to mention highly illegal - drug. Mac has some misgivings, but the huge amount of money he will be paid is more than enough to assuage them. And so, Mac's quest to find Pure Poom begins.

This whole first section of the game is presented through a combination of long, fully-animated cutscenes interspersed with interactive parts (like where you control Mac trying to escape the break-room). This is indicative of the game as a whole - there are many long, involved cutscenes, full of realistic and often humourous dialogue. Probably 20% of the whole game is acted out through these cutscenes, and this makes the game hugely immersive and atmospheric.

Mac's quest takes him to several very different locations: a sand-covered desert planet (think Tatooine from Star Wars), an intergalactic gas station, and a volcanic world. On these worlds Mac meets lots of varied and interesting people, all of whom have unique personalities and motivations. The dialogues are very realistic, and Mac's own questions and responses are very amusing.

The graphics are simple, but this really doesn't matter. There are so many little additional animations (fires crackling, characters going about their days) that you can't help but feel drawn in. The city you start in is especially well done, with shadowy streets and seedy characters. The music, although quite sparse (the game's creator has promised to add more in a later release) is very nice and appropriate. The game also features the unique feature of a jukebox. At the starting screen, next to "new game" and "load", is "stereo". Click this, and you can play any part of the game's soundtrack at will.

Another novel feature of the game is a "bonus area" after the game's end. During the game there are three opportunities to *do something* (to tell you what would give it away). Should you do this all three times, you will unlock the bonus area, in which two minor characters from the game go on a long and hilarious rant about the effect Mac's quest had on them. I replayed the game several times trying to unlock this area, but it was definitely worth it.

The game has only one weak spot: unchallenging puzzles. There are some interesting and novel puzzles, but even those are not particularly hard to work out. However, there is one "puzzle" that will probably have you stuck for awhile. It's more of an action sequence than anything, where you have to click on a certain part of the screen to move your character out of the way of an attacking animal. You can either click top, middle, or bottom, and if you don't move the part of your body that the animal is currently swiping at, you will get killed. Although you can save between each swipe, it does grow frustrating seeing Mac get killed ten or more times. The simple puzzles do allow the story to move along at a smooth rate without much frustration, which is a good thing.

I would recommend Perils of Poom to all fans of adventures, amateur or commercial. The strong story and realistic dialogues should appeal to any classic adventure aficionado, and are well worth spending a few hours of your time to experience." 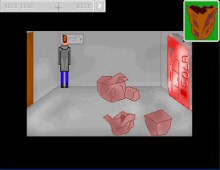 Perils of Poom, The screenshot