Yes all yo Wayne's World-Fans listen up - this is the Game to the movie. This is weird, stupid, funny, illogical - this is 100% Wayne's World. If you don't know the film - get out of here, you will hate this game! This just isn't something you go and get if you are searching for a typical high-class Adventure. This game is as chaotic as Wayne's World is and is supposed to be. That's the charme of the movie as well as of this game. The story? Yes, there is one... Wayne and Garth decide to do a Pizza-Thon to get 50,000$ to save their TV-Show that will die in 3 days if the mayor doesn't get enough money to rescue his budget. Sometimes the calculated immaturity gets a bit annoying, overall this is fun for every Wayne's World-Fan - party on...

Wayne's World is a faithful adaptation of the wacky '80 movie of the same name that predates Beavis & Butthead today. Help the bumbling duo set up a pizza delivery business and claim their 15 minutes of fame. Unfortunately, the ability to switch between characters and decent interface can't compensate for bad (i.e. illogical and just plain dumb) puzzles and bad writing. If you're not patient, or not a die-hard fan of the movie, steer clear of this one. Zchwing! 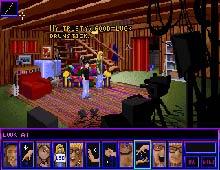