The last game in the Transylvania series ends in a high note with improved graphics, much better plot and writing, and more difficult puzzles. This time you're not just up against an evil vampire but entire armies of horrific creatures. The verb-noun limitation of Comprehend results in a few annoying "guess-the-verb" puzzles, but other than that it's an excellent, action-filled trip into the lands of the undead. The spooky atmosphere is carried well with the graphics and real-time threats you always have to deal with. Definitely the capstone of Polarware's career and one of its very best. 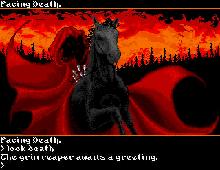