One of the quirkiest and most underrated adventure games ever, Tass Times in Tonetown is a fun romp in an psychadelic / punkrock alternate reality that could have been conceived by Timothy Leary. You job: visit Tonetown to save your grandpa from a hideous crocodile creature named Franklin J. Snarl, with the aid of your dog who not only could talk but became a star reporter.

Based on the engine used in 1985's Borrowed Time, Tass Times sports an intuitive icon-based interface and extremely creative puzzles (although they are mostly easy due to the small number of items you can pick up and use). Exploring the gameworld is half the fun-- nowhere else will you see floating phones, triangular moon, and NPCs that look like futuristic MTV generation come to life. The game even has a convenient, but logical, explanation of Tonetown's existence: it is your grandpa's dream comes to live thanks to the "dream hoop" he invented. With wacky puzzles, great graphics (for its time), and one of the best premises ever, Tass Times in Tonetown is an extremely original game that's simply a must-have for adventure fans.

An interesting anecdote concerns the origins of the name "Tass" in the game's title. According to Brian Fargo, this was Michael Berlyn's favorite utterance around the Interplay office. Having gotten a degree from Harvard where the school motto is Latin term Veritas, Mike was used to saying "tass" to means "cool" -- this stuck, and became the game's final name. Brian didn't like it much, but he thought it still sounds better than Enio The Wonder Dog, the game's original name. 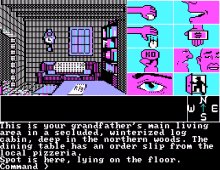