This is a zany adventure/RPG game designed by none other than Steve Meretzky. Although admittedly not as funny as his Spellcasting series, this game is still chock full of Meretzsky hallmarks: lots of funny characters, wacky plot, and some tough puzzles. As leader, you must lead the Superhero League of Hoboken to stardom by taking on increasingly difficult missions, and endure a fair amount of political satire and silly combat sessions where you use hilarious superpowers, such as the ability to see through pizza boxes and kitchen objects as weapon :) Highly recommended for everyone, although be prepared for some aggravating back-tracking if you forget an important item somewhere, and some very cheesy dialogues that are too atrocious to be funny . 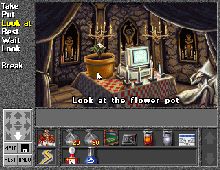 People who downloaded this game have also downloaded:
Sanitarium, Shannara, Maniac Mansion Deluxe, Lost Files of Sherlock Holmes 1 (a.k.a. Case of the Serrated, Legend of Kyrandia, The