StarFight VI: Gatekeepers is an incredible spaceflight adventure game that saw over 15 months in development. Aside from the amazing fact that this game is freeware, StarFight VI also ranks as one of the largest freeware games ever made despite some cheesy names and cartoon characters. The compressed file comes in at a whopping 180MB+, packed with eye-popping DirectX-driven SVGA graphics and plenty of action. The plot, which continues from previous games in the series, casts you as Simon Miller, captain of container transport named -- err-- MicroSpace Iron Curtain (no, I'm not making this up). You are employed by ANB, a galactic organization which is embroiled in a bitter battle against the Order of Light, another giant organization led by former ANB leader James Egg (I'm also not making this up). The time is January 2263. 1800 hours on this seemingly usual day, container transport CTR MicroSpace Iron Curtain left Mars orbital processing; destination: dilithium loading station orbiting Hell's Gate III. Little do you and your crew realize that they are about to enter into an adventure of a lifetime...

What makes StarFight VI unique is neither the spaceflight nor adventure portion-- both of which are very well done, but the presence of both in the same game. Your ship would be engaged in a furious space battle for a while, and the game would shift to a traditional adventure mode, in which you play Captain Miller from the first-person perspective. The space combat mode is where the game really shines-- DirectX graphics are very well done, and all the ships and other space objects are well designed, each with its own detail and recognizable flight pattern. Ship handling is a bit awkward, but once you master the controls, blasting enemy ships becomes as much fun as it gets in commercial titles. In the adventure mode, you will collect items, talk to your crew and other characters, and solve inventory-based puzzles. Puzzles are neither creative nor challenging, but they are logical enough to provide a refreshing change from hectic space combat.

Although StarFight VI is a polished game, I have a few complaints. First, the poorly-drawn cartoon characters and average graphics of the adventure portion are a jarring contrast to the beautiful, jaw-dropping graphics of the space combat portion. I like the idea of space combat interspersed with puzzle-solving, as the adventure portion provides a good mechanism for advancing the plot (and this is used to good effect in the game), but more challenging puzzles and better graphics would be welcome. The game should also be a tad longer, and the ending feels a bit too abrupt. But hey, given that the game is freeware, we can't really complain about longevity :) All in all, StarFight VI is a highly impressive effort which is well worth a look for both action and adventure fans-- impressive enough that we decide to be a download mirror for the game's creators JD-Production. (although due to our *cough* bandwidth traffic, we advise you to try the other download mirrors on the game's website first :P ) 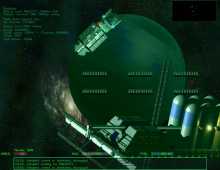