Legend took a brief interlude from the adventure genre to develop the third installment of Star Control for Accolade. Unfortunately, the adventuring part boils down to a lot of clicking through endless dialogues. Still, it has a certain cute appeal, with cool aliens and a fun little (network capable) "hyper melee" space combat game built-in. Overall, it feels as if the game was (gasp!) rushed out the door before being fine-tuned. It's fun... just don't expect it to be anything like a Legend adventure (or even Star Control 1 & 2, for that matter). 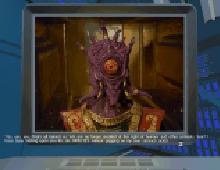