As Ernie Eaglebeak, sorceror's apprentice in the third installation (and last one) of Spellcasting series, you going on the spring break with your fraternity brothers. Using your wits and whatever magic you learned in the university (and picking up on the way) you have to fight for your honor, with quite few people trying to prevent you from that, including the police department. While the plot might sound weak or boring to some of you, the game is not at the least. It shines just like two previous ones, an example of how a good idea can win just by itself, without all the 3D graphics and special effects. Give it a try, the trilogy is worth it.

The last and best game of the series, Spellcasting 301 once again puts you in the shoes of bumbling nerd sorceror Ernie Eaglebeak as he joins his fraternity brothers on a spring break. The game is somewhat difficult, though not frustrating, and there are multiple solutions to many puzzles, some of which are optional (i.e. you don't need to solve them to win the game, although it's a lot more fun to do so). A clever plot twist and surprise ending will delight fans of the series and provide excellent closure to one of the best game series ever. 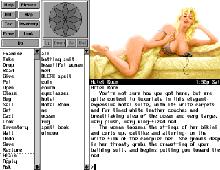