This very Pratchett-esque adventure comes from the makers of Spellcasting 101 and Time Quest. It is a text adventure, featuring graphics for enhancement, and menus for the commands, so you hardly ever have to guess what word the programmers have been thinking about.

You are a junior knight in a fantasy world. Your comrades rather dislike you as you are very, well, clumsy, always mixing up everything and wreaking havoc where you appear. However, you're tossed in the middle of a conspiracy where YOU have to rescue the princess, save the kingdom, and become a true hero.

I don't want to give too much away of the plot, but let me point out some of the highlights. The humour in the game is great. How great? I was literally rolling on the floor laughing because of the great jokes. In instances it's even more fun and crazier than Monkey Island. Especially the trip to the fantasy island with the swamp trek raft was hillarious! Or the scene with the singer where (according to her speaking problem) some consonants are replaced by others so that you have to watch carefully what you have to type!

There are so many inside jokes, you will have to look twice to catch them all. There are puns, stupid humour, crazy (but mostly logical) puzzles, dragons, witches, knights, and kings. If you are a fan of Monty Python, Terry Pratchett, Douglas Adams, or Zucker/Abrahams/Zucker I highly recommend this game!

In contrast to the heady Time Quest, Bob Bates lets loose his lighter side in this side-splitting medieval adventure starring the incredibly accident-prone knight Eric the Unready. Just about every famous person, things, or fiction is at the mercy of his razor-sharp parody pen in this game, from Star Trek to the The Monty Pythons.

One of the (many) great things that make playing Eric The Unready a blast is the tremendous *variety* the game offers, both in locations and types of puzzles. The game is loosely divided into "day," each of which is marked by hilarious cut-scenes and parody newspaper that recaps Eric's misadventures in the previous day and pokes fun at more people and objects than you can shake a stick at. The objects, locations, and puzzles in each day are self-contained, and as a mark of superior game design similar to LucasArts games, you can neither die in this game nor find yourself at a dead end where restoring is necessary. Puzzles are devious but fair, with some taking on a different gameplay interface (e.g. the raft navigation screen in Star Trek spoof section) that are anything but boring. You'll be laughing from the start to the finish as you help Eric along one misadventure after another. 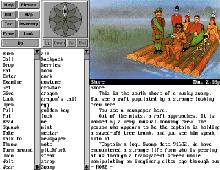 People who downloaded this game have also downloaded:
Spellcasting 101, Spellcasting 201, Hitchhiker's Guide to the Galaxy, The, Legend of Kyrandia, The