An inconsistent adventure that features an interesting plot hampered by poor user interface, Secret Mission is a relatively unknown adventure game from French developer Microid, who would go on to produce a much more solid and better-known Amerzone CD adventure. Secret Mission opens with the tried-and-true adventure gaming premise: you wake up in a nondescript hotel room with an amnesia, with no recollection of who or where you are. After meeting a certain attractive young lady, you learn that you are Jeff, a double agent who pretends to work for the Americans, but actually works for the Russians. You are now in Opalia, an exotic Middle East country that is about to be embroiled in a coup d'etat: Vishaka, the prime minister, is planning to assassinate the King to usurp his power. Naturally, your mission is to find the evidence of this scheme, so that Russia can use it to gain influence over the country. The Americans are after the same goal, so you must not arouse their suspicion of your traitorous acts while you carry out the secret mission.

Gameplay follows a typical inventory-based adventure, although for some reason you cannot use the mouse, so you must use the keyboard only to move around and interact with the environment. Similar to Alone in The Dark, objects you can interact with are shown in a small window when you are close to them, and pressing ESC brings up an action menu you can toggle to get, open, move, give, etc. The number of verbs in the menu makes this interface very unwieldy, and using items in your inventory is a cumbersome process. Also, the game is played from an isometric perspective, where Jeff can only walk in four cardinal directions. This very outdated design makes moving very frustrating in confined areas, and several times I had to repeatedly hit the arrow keys to get Jeff "unstuck" from the wall. Interface weakness aside, though, Secret Mission serves up an interesting espionage thriller, with many plot twists and turns, shady characters, and several ulterior motives. The puzzles are, for the most part, logical, although some (such as decrypting the hierogryphics) are quite interesting. Overall, an above-average adventure that fans of the genre should take a look, although don't expect another Last Express. 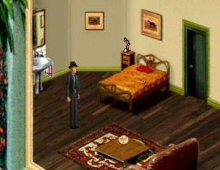