Teen Agent is a funny and well done adventure game where you play as a teenager that have to solve a crime that the noone else have managed to solve. The crime was a robbery where gold was mysteriously removed from a bank and not a single trace is left from the thieves. You are now taken to a training camp by a special organization and you have to try and solve the crime.

The game is using a similar game engine as seen in The Secret of Monkey Island and the developers have also tried to create the same humor and general jokes in the game. While they haven't succeeded all the times there are several good examples of that they have also done a good job at certain part of the game. Just the introduction to the game is a good example.

While the game is good with many funny details and a long and quite funny story the graphics could have been better and in my opinion the only reason why Teen Agent didn't go all the way regarding the sale of the game. Overall a great adventure game that I can only recommend.

Teen Agent is a huge adventure game in which a teenager is picked to solve the mystery of the disappearing gold. Captured by two men in dark glasses and long coats, you are sent to a training camp for secret agents. It's a fun point-and-click animated graphic adventure that is both humorous and exasperating-- a worthy attempt to emulate LucasArts style and humor.

Note: the game was released as a commercial game in Poland, with full Polish voice acting for the CD-ROM version. The English version was released as freeware shortly after. 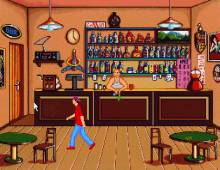