Level 9's last adventure game features one of the most unique plots and player character ever seen in a game, even though the puzzles are sometimes bordering on the illogical. You are a police man who returns from beyond the grave as a ghost who has to overcome the troubles of ghost-dom together with your ghost friends in order to solve your final case and avenge your own death.

The game is excellent in every respect-- the parser is very powerful and rivals Level 9's own Knight Orc in versatility. Non-player characters are quite memorable, especially your ghost friends who will pour out their hearts on you and keep constant company with incessant stories of how they died. Most puzzles involve pleasing those ghosts so they could help you in return, and are largely fun because you have to think like a real ghost to succeed :) Overall, Scapeghost is a great but overlooked Level 9 classic that isn't nearly as good as their best games, but is definitely much better than most other IF games. I don't recall ever playing a ghost again until LucasArts' Curse of Monkey Island and, more dramatically, Dreamforge's Sanitarium. 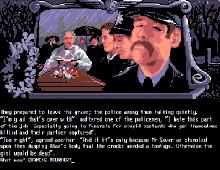 People who downloaded this game have also downloaded:
Sanitarium, Knight Orc, Realms of The Haunting, Lost Files of Sherlock Holmes 1 (a.k.a. Case of the Serrated, Peasant's Quest