Level 9's breakthrough game and the game that first showcases its new robust engine, Knight Orc was one of the first games to give a voice to a villain: in this case, you play an orc named Grindleguts, who was abandoned by his buddies after a night of (what else) partying. The orcs, caught unawares by a troop of human knights, arrange for a "Contest of Champions" to take place in the morning. They tie our anti-hero Grindleguts to a horse and give him a lance to defend himself. Then the trouble begins in earnest, as you must deal with one urgent life-or-death situation after another, and it is quite some time before you are free from gut-wrenching time constraints to deal with puzzles at a more leisurely pace.

The puzzles, jokes, characters and parser are all up to par with the best that Infocom had to offer. I suspect that this game did not receive the props that it should have due to its subject manner -- playing the "bad guy" didn't really become in style until Syndicate. While Grindleguts is a greedy, violent, angry little pit he is also a character worthy of our respect. Especially among the piles of spods he's running around with. I suspect that the background characters in Knight Orc are set to mirror the kind of individuals we (the gaming community) can't -- in theory -- stand or relate to in real life. Jocks, girls, urchins, soldiers... when that lot are in our world (a game) they should, naturally, be considered the outsiders. Knight Orc describes them with as much distaste as we normally get in "their"environments. Bloody fabulous. If you take the time to enjoy this game -- to smell the roses -- Knight Orc will return your attention with an incredible amount of pleasure. If Knight Orc were a woman, it would be the very cute, very sarcastic, yet seemingly shallow girl who melts like butter for you when you steer the pillow talk completely in her direction... at which point you then fall in love with her depth. Arguably the best game from Level 9, and a must-have. 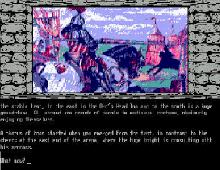 People who downloaded this game have also downloaded:
Hitchhiker's Guide to the Galaxy, The, Arthur: The Quest for Excalibur, Myth, Lancelot, Gnome Ranger