As King Arthur's favorite knight Lancelot, set out on a quest for the Holy Grail and save a myriad of imprisoned knights and damsels in distress along the way. A welcome change from the difficult Knight Orc, this is a fun, introductory-level game that is well-written and well-paced. The puzzles may be too easy for some, but none of them is illogical or irrelevant to the story.

As one of Level 9's last adventures Lancelot features all of the advanced commands seen in Knight Orc, such as FOLLOW and GO TO. The game seems to be even bigger than Knight Orc, with over 100 locations to visit, all of which are well-described and teeming with various characters going about their business. One of the best things about Lancelot is the freedom (or the illusion thereof, anyway) for the player to do whatever he wishes, but with appropriate reward and penalty. When the Black Knight challenges you to a joust, for example, you can choose to decline. And if you accept and win, how you react afterwards will have consequences later on down the road. Chivalrous actions worthy of a knight is rewarded with a positive number of points, while cowardice and other ignoble actions will net you negative points. So you can lie, fornicate, and steal your way to the final part of the game, but you'll likely have minus hundreds of points by then and be judged unworthy of the Grail. This is a great system that requires the player to seek out chivalrous deeds to accumulate enough points for the final challenge.

Overall, Lancelot is an outstanding, well-written IF that is highly recommended for novices and experts alike. It's full of fun puzzles, atmosphere, and solid scoring system that probably inspired Sierra's Conquest of Camelot years later.

Play this adventure in the times of king Arthur and Camelot. Of course you are Lancelot and in search of the Holy Grail. But you'll start at the beginning. 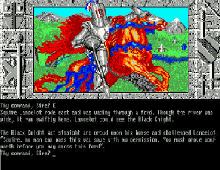 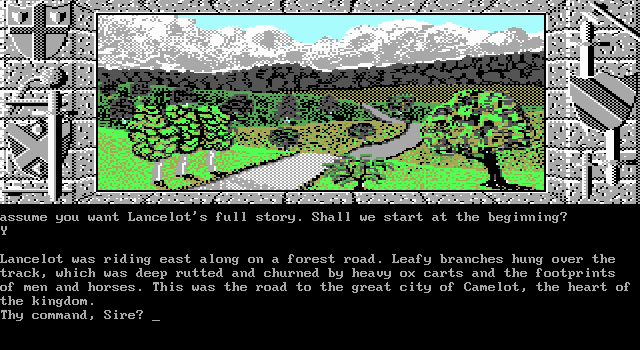