Night of The Hermit

Night of the Hermit is a fan game based on Ron Gilbert's classic Monkey Island legacy. It is not the first game to attempt adding something to the Monkey Island universe, nor will it be the last one. There are probably hundreds of attempted LucasArts fangames trolling about on the internet. This one stands out in lots of ways, though (not in the least that it is actually finished)

For a start, this game doesn't have Guybrush Threepwood as the protagonist. Instead, it has you playing as Herman Toothrot. This is a good choice, in my opinion, as Herman was rather underdeveloped in the original games. This game gives you an opportunity to get to know more about his past and his personality. It is a very funny game. It may not be of the same genius as that in the LucasArts games, but it will certainly remind you of their adventure games in this department.

Now, the story. It all starts with Herman finding a message in a bottle on the shore of Monkey Island. In it, he finds out that his grandfather died and left him a large mansion on Badger Island. Herman decides to move in there, but because the bottle took a very long time to travel, by the time he gets there he finds out the mansion has been turned into a hotel. You'll have to find the deeds to the mansion, and prove that you are its rightful owner.

The plot is very rich, in that it has you tackling lots of side quests in order to solve the game. This is not common in an amateur adventure game, and stands proof to the amount of work the author put into his game. The result of this is a long game (48 rooms). It's not as long as most commercial games are, but it's long enough to give you a satisfied feeling when you finish it. That is, if you ever get to finish it.

Because with that, we hit one of the weakest points in the game. The puzzles are, in my opinion, far too difficult. The solution always has logic behind it - but sometimes the logic can be very strange. The game provides you with very few hints, if any. And to make things worse, it tries to rule out solving the puzzles by accident. You can not solve a puzzle until Herman has found out everything he has to do, talked to the right characters, and looked at right objects. This can make the game very frustrating after a while.

The graphics aren't good at all, though that's more a matter of lack of graphical talent than not enough effort. The rooms aren't empty, they're just ugly. The style throughout the game is consistent, though - and once you're used to it, it doesn't disturb you. The character graphics in the game are all 'borrowed' from old LucasArts games. This doesn't necessarily mean that they portray the same character as they originally did, though. For instance, you'll find DOTT's Dr. Fred taking your ticket as you board a ride, and Elaine Marley sitting in another booth, also taking your ticket.

The music is done very well. It's unobtrusive, and merges perfectly with the scene. None of them are original, as is usual with most amateur adventure games. An additionally downloadable voice pack should be available pretty soon. It was not at the time of this writing though, so this review doesn't cover it.

This game is somewhat of a tribute to all the old classic Lucasarts games, and as such will appeal very much to everybody who played at least one of them. It is a very good game, and should be fun to play for those who haven't as well. Though in my opinion a very hard game, it provides lots of non-vital characters and objects for you to interact with, and as such won't disappoint anybody. 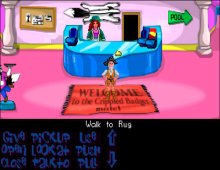 Night of The Hermit screenshot

People who downloaded this game have also downloaded:
New Adventures of Zak McKracken, The, Escape from Delirium, Out of Order, Maniac Mansion Deluxe, Flight of the Amazon Queen