You control the character Klayman and wake up in a room without any knowledge and on what has happened or what is going to happen soon. In each room you go to and of course the one you start in you will have to perform one or more things in order to get on to the next room. Most of the things are small puzzles that you have to solve before you know how to continue.

Sometimes after leaving a room you have to continue the game by moving around in a 3D person view style. This could really have been done better but it is only a very small part of the game so you can live with it. There are tons of small little puzzles. Many of them are very easy to solve but there are also several of them that requires quite a bit of time. Sadly many of them have no real relation to the actual game story which is a bit sad. Some of the rooms don't make much sense and at first you have no clue what will happen in the room you just entered.

The graphics are very smooth and I find them simply amazing. I know that graphics aren't the most important thing in a game but in The Neverhood they really matter. The controls are very easy as you simply click on an object you either want to pick up or use and Klayman will automatically do the thing that is possible to do wit the object. I like the little details when you pick up an object so remember to look at that. An excellent game that could have gotten a top rating from me if the puzzles had been more related to the actual game story and if it had contained a bit more varied interface.

The Neverhood is one of the most original adventure games ever made, and one of the prime examples of how an ultra-slick style is sometimes enough to carry the game, even though we all know that substance is more important than style. Instead of using cartoons or computer animation, they built the entire set of the game with 2 tons of clay! Quite an achievement in any media, and the result is nothing short of amazing.

The storyline is quite simple. You play the role of Klayman; you wake up in a room, and you have to figure what to do from there. Rooms and puzzles are played from a third person perspective, while moving from one place to another takes form in FMV cut scenes in first person. The game is extremely appealing to all family members, and is a lot of fun to play with.

Unfortunately for all its graphical originality, puzzles in The Neverhood is nowhere near as creative. The most annoying part of the game is the room with the wall that goes on to infinity, the wall of which has the entire "bible" of the klay world (klay universe?) in it. This damned thing spans 38 (yes, thirty-eight) rooms, and believe it or not, I actually spent a few hours reading it all... and it gave me quite a headache. As in The 7th Guest, the puzzles in The Neverhood bear no real relation to the story at hand -- they have more in common with bar bets or the logic problems you might find in Games magazine, except much more pointless and repetitive. Many puzzles are just rehashes from other Myst clones: to open a door to a new location, you?ll have to solve a tile-sliding puzzle; to open another door, you?ll have to match musical notes by filling a doorbell with water -- if you fail, you?ll have to start over from the beginning until you get it right; to open yet another door, you?ll have to guide a mouse safely through a maze so he can eat a tasty slice of cheese. Fortunately, there are usually hints available if you go to the initial room and down the ladder.

Perhaps due to lackluster puzzles and a high price tag, The Neverhood neither sold well nor won critical acclaim, despite being original and well executed. Be warned that all the appeal lies in the style here, not so much substance. If you play adventure games for the interesting puzzles and situations, give The Neverhood a miss. If you prefer story-oriented games with a unique style, though, The Neverhood more than fits the bill. 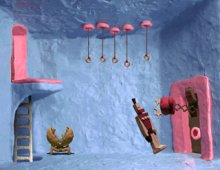 People who downloaded this game have also downloaded:
Sanitarium, Oddworld: Abe's Exoddus, Maniac Mansion Deluxe, Out of This World (a.k.a. Another World)