Definitely the best cyberpunk game I've ever played, Neuromancer is an excellent adaptation of the classic book of the same name. You play a hacker who is struggling to make ends meet at the beginning, only to discover that all is not well in cyberspace.

Although initially there are not many locations for you to visit in the game, there is a great deal to find out and cyberspace locations ("WELLs") you can visit. For instance, you have a special connector attached to your head that allows you to insert silicon chips. These chips contain various "skills" which will enable you to achieve certain objectives that would otherwise remain beyond your grasp. The skills, which include subjects like Psychanalysis, Sophistry, Evasion and even Cop talk, can also be upgraded, so while you might have the Cryptology skill chip, it may not decipher an encrypted code word until you find a way of upgrading it to version 2.0 or even 3.0. You will generally acquire skills and upgrades by talking to other characters within the game, and this brings us to the game's weakness: the specificity of its parser. Neuromancer unfortunately falls into the guess- the-word category, particularly when you're presented with the option to ask a character, "WHAT DO YOU KNOW ABOUT .................". The word you type in may be one of several descriptions for a particular person or organization, and the parser will not accept anything less than the exact word the designer had in mind. It can be misleading because if your word isn't exactly what is required, you`ll get a, "I DON'T KNOW ANYTHING ABOUT THAT." type reply, which can throw you off track, when infact you need to keep hammering away with every variation of the name you can think of.

A notepad is absolutely essential for playing Neuromancer, as there is a lot of information and WELL addresses to keep track of. Neuromancer is undoubtedly the best "hacking" game in existence, as the thrill of hacking into forbidden sites, editing databases to further your cause, and generally finding things out is exhilarating (and harmless, as opposed to real life ). Overall, no cyberpunk fan should pass up this overlooked classic.

This cyberspace adventure puts you in shoes of Case, a computer maniac who has just gone broke. So what does a man with no money do? Tries to gather information about the leading corporations and their bizarre plans about the future of the world!

You will get to explore many locations in Chiba, the city in which the game goes on. You first need to get access to cyberspace by finding a computer and software for it. Then you can buy and sell brain implants, body parts and other strange things in order to make yourself more technologically advanced. A high-tech adventure in cyberspace is always a good way to make some money. Neuromancer is a fantastic game!

Based on the William Gibson story of the same name, Neuromancer is set in a dark, dystopian future world where high technology is valued above human life. You play Case - a hacker and mercenary who wants to do one last big job and get his life back on track, but why have so many of your fellow hackers been disapearing lately, and what's going on in the "Matrix". If you've ever read the book then it WILL give you a head start in the game. Many characters and concepts are exactly the same, others have been left out completely. Plus the actual plot itself is more of an adaption of the book than a carbon copy, so there are still suprises in store for you.

This is no standard adventure game. Yes, the same elements are there: travel from location to location acquiring the various clues and information needed to progress further, but once you get into the various "hacking" elements then you will understand why this is such a classic. A good example re the various skills that you can acquire in the game. These come in the form of computer chips that are inserted into a port in your head (no, really) and boost your abilities. The Cryptology skill chip will allow you to decode encrypted data and passwords, while "coptalk" gives you the ability to talk like a policeman - which does come in handy at one point. Each skillchip comes in different versions, so a v3.0 skill chip will be more useful than a v2.0, but obviously more expensive.

Then there is cyberspace (or the "Matrix" as it is called in the game.) At various locations there are terminals that allow you to read bulletin boards, or contact your bank and download some much-needed funds. Each of these terminals only has a limited range in cyberspace though, and you need to get your hands on a "deck" before you do anything really fun - and most likely illegal. For instance if your funds are running short then you can just hack your way into a corporations system and add your name to the employee list. Now you get a weekly paycheck for 10000 credits. However, there are obstacles that must be overcome in cyberspace. Besides having to decrypt passwords to enter systems you may encounter "ICE", which stands for Intruder Countermeasure Electronics, these are tailor made artificial intelligence's which act as guard dogs in the matrix. You can buy ICE breaker programs and computer viruses from dealerships in the game, but you must make sure that you have the right tools for the job or you could end up brain dead.

The game does have one big failing - the sub standard parser that is used to interrogate characters in the game. Unless you ask EXACTLY the right question then it is possible to be thrown completely off track, abandoning a line of questioning which would have been successful if you had just phrased things differently. Apart from that small thing the game is excellent, thoroughly engrossing and very enjoyable (just make sure you have a notepad ready while playing - you'll need it.) 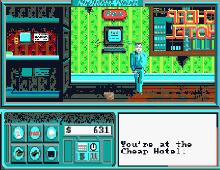 People who downloaded this game have also downloaded:
Maniac Mansion Deluxe, Hitchhiker's Guide to the Galaxy, The, Out of This World (a.k.a. Another World), Beneath a Steel Sky, Sanitarium