Several years after the nice adventure Mix Up Mother Goose, Sierra continues their adventure with this nice one. You play yourself (you make up your own name before you start) and you'll magically enter Fairy Taleland. A nice dragon wants your help. All the fairytale stories are mixed up. The gameplay has been improved of course with click and go, without any typing. The gamemusic is fabulous, nice famous classical songs.

Mixed-up Fairy Tales is a Sierra On-Line title that borders on the edge of the edutainment genre. It was released in the early nineties after being developed especially for the DOS format. It plays as an adventure game from the third person perspective, but instead of having a classical puzzle-solving theme, it is more of an educator.

In this game, Bookwyrm, a magical dragon, is the keeper of all of the classic fairy tales in his special book. Somehow, the fairy tales have become mixed up and confused, and Bookwyrm has brought the user to the land of wonders to help sort them back out. The user actually plays the part of a little child, and has a choice of six avatars. The gamer can give his charge whatever name he wants. There are five famous fairy tales that the user has to sort out: Cinderella, Jack and the Beanstalk, Snow White, Beauty and the Beast, and Bremen and the Town Musicians. The willful and mischievous troll, Bookend, has cleverly combined them all.

All of the fairy tale characters have a problem that the user will have to help them solve. Jack is having a time chopping down the beanstalk, because he believes someone has stolen his axe. Cinderella and the handsome prince are not hooking up because the glass slipper is missing. Snow White is just plain lost and can't find the home of the seven dwarves for anything. With all of the problems that the user has to face, he is fortunate to have Bookwyrm in his corner offering advice and little hints whenever he gets stuck.

The game is basically geared for children and so features a much simpler user interface than most other adventure games. A single icon is used to interact in every way with everything. Using an object is the same as walking across a room, without any clicking in between. Also playing to the younger crowd, the user cannot die. There are also no dead ends where the user will not be able to complete the game because he failed to do something in a previous sequence. The game saves itself automatically and is titled beneath the character's name, instead of requiring different inputs for saving.

Overall, this is a nice little children's game, complete with elements of many children's stories. As long as the gamer keeps Mixed-up Fairy Tales intent in mind, it is going to be a satisfying play. If a thirty-nine-year-old user with advanced college degrees downloads this for a challenge, he is not going to be pleased. But it is perfect for kids, and many adults will enjoy it for its classic feel. 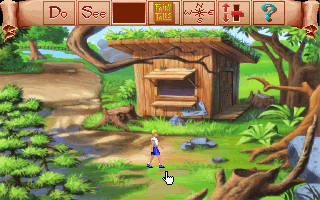