In this futuristic game, you play a security agent for giant software corporation IC&D, assigned to investigate crimes that have been committed in Metropolis. Gameplay is similar to Sierra's early AGI adventures such as King's Quest 3: you type commands in plain English and maneuver your character around with cursor keys. Once you solve a crime, you will gain access to the "zoom tube" to another level of the city, where another crime awaits your sleuthing skills. There are 10 crimes in all, each one more difficult than the last. The parser is not up to par with Infocom games, but it is adequate. One of the game's innovations is that it allows you to communicate in spoken English, as opposed to "TALK TO MAN" or "ASK MAN ABOUT X" in most interactive fiction games. You can use phrases like "do you know where the disk is?" and "I would like to buy a disk please." The irony is that the game will often understand ONLY such sentences-- simple ones such as "BUY DISK" will not work.

In contrast to most adventure games, the crimes are solved mostly by askin the right questions, not by using items in your inventory. This makes Metropolis perhaps the world's first conversation-driven game, and the results are surprisingly good. The plot unravels at a good pace, and there are many futuristic gadgets to use, and interesting droids to talk to, that you'll likely forget about the absence of inventory-based puzzles. All in all, a wonderfully original, innovative, and captivating old game that deserves much more than its obscure status.

An obscure adventure game that was at the time of its release something of an innovation because it offers digitised speech through the PC speakers (although, it has to be said that the quality isn't that great).

In Metropolis you play a security agent assigned to investigate crimes in a futuristic city. Gameplay is parser driven (you type in commands) and most crimes are solved by asking question of the city's inhabitants.

The graphics are functional and the less said about the PC speaker speech the better (damn that hurts my ears) but neither detracts from what is a highly original and charming game. I like it, if you have any taste then you will too. 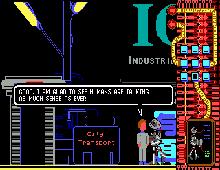 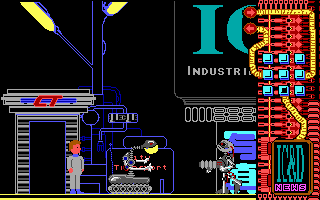