The first game in the Tex Murphy series is a great sci-fi adventure with some (gasp) action elements. Technically, Mean Streets was very innovative game for its time, featuring 256 color VGA graphics, digitized PC speaker sounds, and even a well-coded flight simulator based on the engine used in Echelon.

The game's strongest appeal is the very well-written plot that is full of many unexpected twists and turns. You play Tex Murphy, a PI who is trying to make a living in 21st century San Francisco. Your first case, brought by a beautiful, seductive Sylvia Linsky, is to investigate the purported "suicide" of her father Carl Linsky, who supposedly jumped off the Golden Gate bridge. Until his death, he has been working on a classified project with a company called MTC. A suicide note and an eye witness to Carl's death have convinced the police to close the case. Sylvia, of course, is not too happy about this. She cannot believe that her father would kill himself for no apparent reason. Equally, she is not pleased about the fact that the insurance company will not pay her the one million dollars of Carl's insurance....

Mean Streets was one of the first adventure games to truly take advantage of the full 256-color VGA palette, and the results are impressive even though most background shots are grainy and characters are poorly animated (Tex walks like a pair of wooden chopsticks). But great graphics alone does't make a great game, and fortunately Mean Streets has enough good ol' inventory and deduction-based puzzles to satisfy fans of traditional adventures. Depending on whether you like action sequences in adventure games, the quasi-3D environment where you navigate your speeder around San Francisco can be either a highlight, or a nuisance. Although flight dynamics is much simpler than Access' earlier wireframe classic space sim Echelon, the graphics are quite impressive for its time: San Francisco's landmarks such as the Golden Gate Bridge and Transmerica tower stand out from the surrounding landscape. Besides this mini-flight sim portion, Mean Streets also contains a simple shoot-'em-up arcade in which you must advance along a long corridor and shoot down the thugs who try to stop you. Again, adventure fans may frown at this distraction, but it is forgivable considering the game's strengths. Luckily, you can set the difficulty level to the lowest, making the fights effortless to win. Another innovation that Mean Streets brings to the genre is the interrogation/conversation interface. Talking to a character brings up their close-up digitized photo, and an array of approaches you can take-- ranging from friendly, to bribery and outright threat. You can get "stuck" forever in the game if you choose the wrong approach for a character, so it's best to save before talking to anyone. Most characters just offer campy, canned remarks, but a few are quite interesting, with a personality to match Tex's ego.

With a long list of innovations and a captivating "noir" plot (although it could be less campy and more Chandler-style), Mean Streets deserves to be called a "revolutionary" adventure game. Purists may wince at the inclusion of flight sim and arcade portions, but the pros more than outweigh the cons, as Tex beckons, and slowly draws, you into his hardboiled world. A must-have, without a doubt. 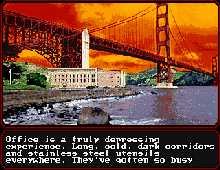 People who downloaded this game have also downloaded:
Martian Memorandum, Maniac Mansion Deluxe, Sanitarium, Out of This World (a.k.a. Another World), New Adventures of Zak McKracken, The