Majestic is another very short but entertaining sci-fi adventure from Istvan Pely, who also designed Zero Critical and Syn-Factor (the latter re-released as Symbiocom). Steve Ramsey of The Quandary says it all about this little-known game in his review:

"The SS Majestic was Earth's finest pleasure cruiser, a crowning achievement in space travel. Yet like another such luxury cruiser, her maiden voyage turned to tragedy, and she disappeared without trace. The search for the vessel had long been abandoned when the Venus Observatory picked up signal within the Pleiades nebula, a signal identified as the Majestic's locator beacon. Someone is sent to investigate, and that someone is you.

You arrive at the Majestic and begin your search. A rather nifty game device is used to conduct the search ? a series of remote controlled Nodes, or exploratory vehicles. You have 4, and you can send each one off to different parts of the ship, and pilot them around from your shuttle. The view you have from each Node is the same as you would have in a first person game if instead of piloting a Node you were exploring in person. Switching between Nodes is like jumping between locations using a map or other device, but conceptually makes far more sense — you remain sitting in your shuttle, piloting your Nodes throughout the vessel, switching between them to see what they are seeing and sending them where you want them to go. They even swoop and fly from place to place as you would expect them to. You don't have to use more than one Node, at least not initially, but if you do, they cannot be in the same place at the same time. Other than that, they can all fly around wherever you can manage to get them to go. Each is equipped with a scanner, a computer link, and a cutting torch. You can switch between these devices by clicking the appropriate button, and a light will indicate which you are currently using. The same applies for switching between Nodes. The scanner will indicate something that can be interacted with, or the presence of a relevant (or not so relevant) item, and the computer link will enable you to access terminals, data storage and onboard equipment. You will be able to download programs at certain spots, which will enable you to perform important functions, and you can acquire a companion program which provides helpful information. Each Node also has a grappling arm to pick up objects. They in turn can be used in certain ways. The programs seemed to be available to all Nodes, but objects only to the Node that picked them up. The cutting torch will get you into and out of some spots, and doubles as a very occasional but effective weapon.

The story is again a strong point in Majestic, although I did think it lurched around a bit, and could have done with being a bit more streamlined. The riddle puzzles are a bit odd given where you are, but the story does explain why they exist in a reasonably credible way. The rest of the puzzles really involve finding the right clue to open the right hatch or door, although towards the end there are some actions that to me were inexplicable (notwithstanding that I worked them out). Most of the puzzles are not hard, although the logic of a few required some large steps. You will have some surprise encounters, and will uncover a mission in which you may or may not succeed. You also don't have to do absolutely everything to be successful, although you receive points as you go, up to a maximum of 2950. I didn't get near the maximum, but did complete the mission.

There was a manual in several languages on the disc, and a solution in English. It was short and light, about 4-5 hours, and reasonably entertaining." 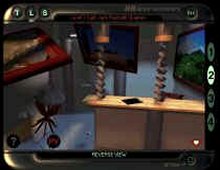 People who downloaded this game have also downloaded:
Other Worlds, Out of This World (a.k.a. Another World), Maniac Mansion Deluxe, Mission Critical, Oddworld: Abe's Exoddus