Billed as "the world's first interactive multimedia novel," Madness of Roland brilliantly fulfills the latter half of its claim (i.e. "multimedia novel") while dismally failing the first (i.e. "interactive"). As celebrated designer Chris Crawford notes in his critical-but-insightful review of the game" "[designer Greg] Roach has created an art film whose commercial value arises from the novelty of the medium he has chosen. He has not created an interactive novel, or an interactive anything. Despite the obvious artistry of his creation, it does not show us anything about how to make interactive art."

Based on the legend of the Paladin Roland, a knight in the service of Charlemagne, the tale of Madness of Roland is told from multiple points of view which you can select at will. Each character tells their own, often contradictory, version of the story. Roland uses text, digital color paintings, animation, QuickTime video, professional "radio theatre" narration, hypertextual links and a complete original soundtrack to transport you to the world of Charlemagne's France.

The story and the way it is told is undoubtedly the best thing about Madness of Roland. Roach's prose is excellent; at times ostentatious, but not overdone. There are plenty of multimedia tidbits that enliven the story, including sounds, movie clips, and animations. Voice-acting, in contrast to most "multimedia adventure games," is excellent; voice actors who played Roland and King Charlemagne are especially commendable. At any time, you can "read" the story from any of the four character's perspective, each of whom naturally has his/her own version of what really happened - similar to Kurosawa's critically acclaimed Rashomon. There are plenty of options that take advantage of CD-ROM medium, such as hyperlinked words that you can click on to bring up a glossary, definitions, or anecdotes. In a few cases, clicking on the hyperlinked text triggers some additional imagery. You can bookmark the text on any screen to return to the story at a later date. The story is well-paced, with enough interesting twists and turns will hold your interest to the very end, whether or not you are familiar with medieval France. Be warned that Madness of Roland is not your standard fantasy/Arthurian story - although it has plenty of violence, sex, and superstition, it would never be mistaken for a voyeuristic "B" movie.

By the time you finish "reading" Madness of Roland, you will have no doubt in your mind that Greg Roach has a way with both words and visual presentation. The CD-ROM is a true work of art. It is, however, definitely not a good "game," so anyone looking for a chance to influence Roland's life will be sorely disappointed. As one of the best electronic multimedia books ever made, though, Madness of Roland is well worth the experience (and the space for full CD on our server). Since you can "see" the story from different characters' perspectives, the rereadability is very high as well. It is unfortunate that Roach later became more determined to produce good "games" than duplicate the wonderful, if passive, experience of Roland. The result is a string of lackluster CD-ROM titles that got worse with each new release (Quantum Gate, Vortex, and finally X-Files: The Game). Roach clearly is a talented artist, but a great game designer he is not. If you want to try his later offerings, be mindful that Madness of Roland is as good as his talent allows. Heed the caveat before you attempt this large download: Madness of Roland is NOT a game—it is a complex multimedia story for adults. As Chris Crawford sums it up in the final words in his review, Roach should "...learn a thing or two about interactivity." This is wonderful electronic novel. 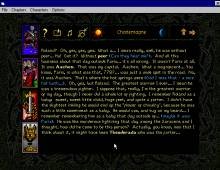 People who downloaded this game have also downloaded:
Maniac Mansion Deluxe, Darkseed, Out of This World (a.k.a. Another World), Oddworld: Abe's Exoddus, Lost Files of Sherlock Holmes 1 (a.k.a. Case of the Serrated