Lure of the Temptress

Lure of the Temptress is a really good but short adventure game. You start the game in a prison and you will have to escape from it as you are the only one who can save the town and the rest of the people from the terrors done by the empire.

This is a charming little adventure that features the "Virtual Theatre" engine-- NPCs follow their own agenda, and finding someone you need is almost a puzzle in itself. Puzzles are logical and interesting, some of which have more than one solution. The interface is also very flexible in that you not only can form verb-noun commands, but can also ask other NPCs (or order your sidekick) to do your bidding. The only fault I can think of for this game is the lackluster graphics and some irrating pixel-hunting. Don't miss this one, folks!

This game is called underrated alot. And I think that's not lied. It's a very catching and addictive adventure game with alot of nice elements. NPC's walking around freely, using their own patterns. Not only that, but they would alsotake part in their own story by talking to each other and more. Nice dialogues and a very good interface really make this game one of its kind.

The action boxes are really well done, you click on an item and an action box with some choices will appear. But not all actions are included, only the ones that work. So you won't get many of the famous comments like "that won't work" or "nope, can't shift it". That makes the game more fun, but also easier to play, because in other games, you won't try all the actions, but here you will, because in 90% of the cases it's going to be an important factor in the game.

The story is quite simple, a city lies under the threat of a sorceress called "Selena" and she brings her followers, the Snorkle. You are a guy called "Diermot" and you have to save the city of Turnvale from them. The game starts off in a dungeon which you will have to escape from.

It's more of an action adventure than a plain adventure, because you will have to dodge some of the creatures while playing the game, or else they will find you. Which also brings me to a negative comment... It's not really realistic that a creature only finds you when you're on its way, when he bumps into you, but not when you're in the same room and he doesn't, even while you think it's looking for you.

Anyway, put this on the shelve with adventure games and it will fit nicely into your collection! Nice one... 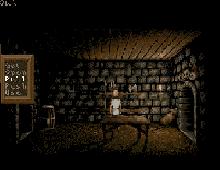 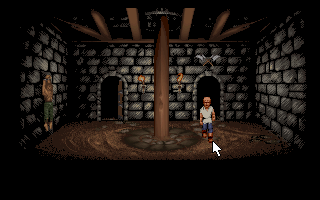 Lure of the Temptress screenshots