Lost in Time is arguably Coktel Vision's best game, and one of the most fiendishly difficult and intricate puzzle games you'll ever come across. You play Doralice, intrepid heroine who has been chosen by the Central Computer of the Space-Time Police because of obscure ties with the Villain of this adventure, Jarlath Equs. Jarlath has stolen a sample of Americium 1492, hiding it the past, because of it's radioactive half life, and needs to bring it back in time to be able to use it to-- what else-- conquer the world. You have to find him and the sample before he destroys the time continuum.

Lost in Time may very well be the most inventory-intensive game ever made, as you'll face literally hundreds of puzzles that require MacGuyver-like logic of combining household items into useful tools. Although most puzzles are logical, some of them require giant leaps of logic and minute hunt-the-pixel syndrome that can cause some players to give up in aggravation. Compounding the problem is the fact that there are always more puzzles you are allowed to tackle than you have the items for, and part of the challenge is to figure out the *order* in which to solve them. Hints are available in the form of 3 "Jokers" which you can use at any time-- and the game is even sneakily coded so that you can't "cheat" by using up a Joker and then restore-- you will find, to your horror, that that Joker isn't coming back .

With a vast scope that spans various eras in time from 1840 to the present, challenging puzzles, and interesting plot, Lost in Time will keep you occupied for days on end. Highly recommended. 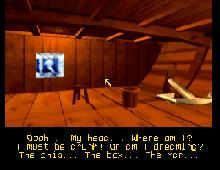