Legend of the Sword

Legend of the Sword is a well-written fantasy adventure that was revolutionary in many ways for its time despite its being relatively unknown: fluid mouse support, on-screen map, compass rose, and some RPG elements such as random encounters and passage of day and night. The find-the-magical-sword plot is typical, but well-written. With engaging puzzles and many locations to explore, this is one of Rainbird's finest old games, and much better than its sequel Final Battle. Recommended. 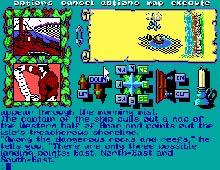 Legend of the Sword screenshots

People who downloaded this game have also downloaded:
Shannara, Legend of Kyrandia, The, Lost Files of Sherlock Holmes 1 (a.k.a. Case of the Serrated, Lure of the Temptress, Journey