Last Half of Darkness

One of the most obscure horror games ever made, SoftLab's Last Half of Darkness attracted a small following when the first part was released as freeware in 1991, and quickly spread over BBS (= Bulletin Board System.. a rudimentary precursor of the Internet, for those of you who are too young to remember ;)) and shareware ftp archives.

So what is memorable about a shareware adventure game that boasts only 16-color VGA graphics? The answer, as with all good horror games, is simple: a strong plot and sufficiently creepy atmosphere. While it won't make the next Stephen King bestseller, the game's premise is much better than your average horror flick. From the game manual: "your aunt sure was a strange one. She was some sort of witch or something. A good witch though, practicing only good spells and magic. In fact, she was working on a potion just before she was killed. Now the secret will go to the grave with her... unless you can find the missing ingredients.... you, being her only living heir received news and came quickly to find out [that] she had plans for you to continue with her work. You [will] gain title to her estate and her fortune, [but] only if you continue with her studies in the field of magic."

Gameplay is standard point-and-click affair—click on verbs (examine, take, operate etc.) to interact with the game. Puzzles are logical, and will seem too easy to die-hard adventurers. A few (e.g. figuring out what each potion does, and finding the password to the computer) are more difficult than others, but they are overall not very taxing.

What is most memorable about the game is the many horrific images, such as the dead girl in the closet and the hooded figure. These, combined with a decent plot and fair puzzles, make Last Half of Darkness one of the better shareware adventures that's worth a look. If you like the game, also check out an even lesser-known shareware old game, The Nine Lives of Secret Agent Kat, which was based on an upgraded version of this game's engine. 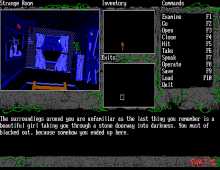 Last Half of Darkness screenshot