One of the most obscure FMV (full-motion video) adventure games ever made, L'Affaire Morlov is a surprisingly decent spy thriller adventure game once you get used to the annoying interface. You play Paul Keirn, a journalist whose life turns upside up one day when his fiancee has been kidnapped, a total stranger has been brutally murdered, and the police fingers him as the main suspect. You have 48 hours to clear Paul's name, catch the real killer, and rescue your fiancee.

The game takes place from the first-person perspective, with all the action going on in real time. Similar to numerous other detective games, your key tasks are to talk to the right people, search each location thoroughly for clues, and study photographic evidence.

Although the plot is semi-interesting and puzzles are logical (albeit on the easy side), the game's interface is the real obstacle to your enjoyment. It takes a few clicks to even look at something in your inventory, let alone use it, and there is some frustrating pixel-hunting. Although puzzles are easy once you know what you need to do, often there is not enough clues as to what you should be doing. Fortunately, the game is never too hard, and it has "built-in hints" in the form of messages from the secret service that will pop up whenever you are at a dead end more than a few minutes.

Like most FMV games that were all the rage in mid-1990s, acting in L'Affaire Morlov is mediocre at best and unintentionally laugable at worst. The quality of acting in some sequences is so low that it seems the designers just handed their friends and relatives a script. So in the final analysis, this is an above-average adventure that could have been much better with more investment in professional acting and a more intuitive (and more mouse-sensitive) interface. If you can get used to the interface and don't mind bad acting, you'll have a decent time with this obscure game. 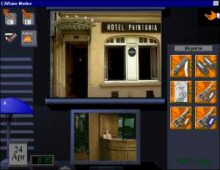