Kronolog presents one answer to the intruguing question: What would the future be like if Hitler's Nazi had won World War II? You are Dr. Hoffman, American scientist by day and leader of an underground movement by night who, in a quest to save your son, are given a chance to alter human history. The intriguing plot and excellent details are unfortunately buried under annoying interface (you cannot even use the keyboard for movement) and pixel-hunting puzzles. Warning: This game is extremely unforgiving: you *can* proceed far into the game only to realize that you need something you forgot to pick up in the first screen. Ignore the walkthrough at your own risk. 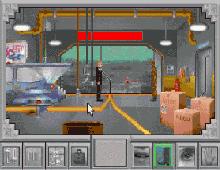