One of the strangest adventure games ever made, Kobyashi Naru has an innovative interface (choose a verb among icons and specific noun from the description of the scene to make sentences) but an incomprehensible plot (similar to Mastertronic's earlier Shard of Inovar). The game, which takes place on an alien planet, hardly makes any sense at all, especially because of the strange words like "klam" that you'll often hear in the game but have no idea of their meaning. Fortunately, easy puzzles help save the game from being an exercise in frustration. Play it only if you are curious about how convoluted a game can get. 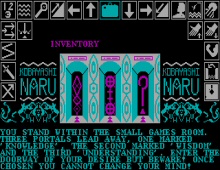 People who downloaded this game have also downloaded:
Kaged, Lost Files of Sherlock Holmes 1 (a.k.a. Case of the Serrated, Journey, Knight Orc, In The Dead of Night