In The Dead of Night

In one of the better but sadly less-known shareware games, you'll play the role of Tom Scool, private investigator hired to steal a rare gem from a famous actress in her mountain chalet. The game sports some good puzzles, believable characters, and an excellent plot. Overall, an atmospheric game that could easily have sold as a commercial game, and bodes well for Trecision's later adventure games, including the recent outstanding Nightlong. 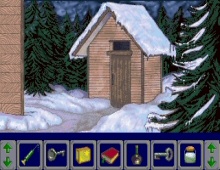 In The Dead of Night screenshot