Kingdom: The Far Reaches is a decent cartoon adventure game designed by Rick Dyer, who worked on Dragon's Lair. Quandary Review's thorough review says it all about this entertaining family game that is slightly better than average:

"You play the part of Lathan Kandor and, with the help of Daelon the magician who is your mentor, you must explore the land to retrieve three of the five pieces of the ancient relic called The Hand of Mobus and, whilst you're about it, rescue the proverbial damsel in distress, the Princess Grace Delight.

Unfortunately, there is only provision for one save, which limits experimentation to a large degree and dictates that only one game can be in progression at any one time. Still, Far Reaches has one very good feature which, personally, I think could be made use of in a lot more adventure games to make them enjoyable for a wider range of players, and that is an easy and a difficult mode. You can play either as a wizard or as an apprentice and this latter mode does at least limit the number of untimely deaths as well as removing some of the trickier puzzles.

Playing is very simple and the designers have made extensive use of video animation. Select the 'history' option at the beginning of the game and a short sequence will set the scene and then as you progress animated sequences introduce you to each location. Just watch the sequence and listen carefully, usually for a hint regarding what to do or where to find something crucial to your quest. Afterwards you must then explore the now static game area with your cursor to pick up any items and find hidden paths to other locations.

A map is provided for easy travel, and, if you have already viewed the video sequence, when you return to a location it is quite simple to skip it. However, you also have the option of repeating these sequences and this is very useful indeed. Sometimes the clues and voices are difficult to understand and several replays are necessary. A text translation of the dialogue would have helped immensely in this respect. Your inventory is accessed by selecting a pouch icon outside the game screen area and it is here where you can also access the map and the control panel for saving and restoring games. The music is not too bad, but it can become a little insistent at times. Fortunately you can turn it off so that it only accompanies the video animations.

Yes, there is a maze in Far Reaches, but not a traditional one where you must wander around and find your own way to the middle. So those of you who hate mazes will be relieved and those of you who like them will be disappointed. I was disappointed, I must confess I quite enjoy having to wander around twisty little passages that all look the same (oops -- wrong game) and find my way from point A to point B to pick up some vital clue.

All in all this is quite an entertaining game -- not difficult, but involving enough. It seems that 'video' is the way games are going at the moment and, though this excludes the player to a certain degree, Far Reaches nevertheless has enough going for it to keep you entertained. It still requires sufficient player interaction and decision making to sit comfortably within the 'adventure game camp'. But, remember, this is not a traditional adventure game where you can wander about and pick up and manipulate lots of objects. There are a few objects to collect, but it is much more akin to watching a fantasy cartoon with the opportunity to direct the action at the appropriate places." 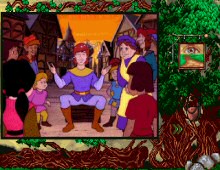