Just as in Goldfinger, you play the daring British secret agent Bond-- James Bond. The game follows the plot of the movie of the same name somewhat, but not as faithfully as Goldfinger-- it didn't start with a ski chase, for instance, and plot development is rushed.

As in the movie, Bond must foil the plot of a diabolical scientist trying to control the world computer market by destroying California's Silicon Valley. This will take him through a lot of nonstop, action-packed sequences that are reproduced in the game pretty well, thanks to real-time puzzles and atmospheric writing. As in the movie, most puzzles require split-second decisions and there is little time to lose. The scene atop San Francisco's Golden Gate bridge is my favorite. Overall, a good game worthy of a Bond name, although don't expect it to be like the movie. If you want a Bond game that is follows the movie more closely, play Goldfinger instead. 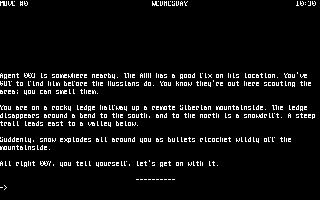 James Bond 007 in: A View to A Kill screenshot

People who downloaded this game have also downloaded:
James Bond: The Stealth Affair (a.k.a. Operation Stealth), 007 Goldfinger, Indiana Jones in: Revenge of The Ancients, Jack The Ripper, Inspector Gadget