James Bond: The Stealth Affair is a fun spy adventure that was originally released in Europe as Operation Stealth in Europe without the James Bond license-- a fact that explains why the game's plot doesn't follow any Bond story. That doesn't mean that the original plot here is bad, though. In fact, it is intriguing enough to be a Bond movie material: a top-secret stealth fighter has been stolen from a US base, so it's up to you to track down its location and bring it back. Of course, the fate of the whole world rest on your weary shoulders...

The Stealth Affair uses a competent interface where you construct sentences from a small list of verbs such as "USE," "TALK," etc., although it is a bit confusing: "USE" and "OPERATE" are used slightly differently although they are synonyms, for example. Puzzles are fun and are neither too hard nor too easy; and since most of them involve using cool spy gadgets such as a passport falsifier, fans of spy novels will have a great time with the game.

With an interesting plot, fun puzzles, and great graphics (upgraded to VGA in this US release), The Stealth Affair is highly recommended for every adventure gamer. Too bad that James Bond license Interplay paid for didn't seem to help the game's sales... although it becomes an amusing gaffe in the game: James Bond apparently had enough of Q and decided to work for the CIA instead . John Glames in the original Operation Stealth wasn't a good enough name for a spy, so it seems. 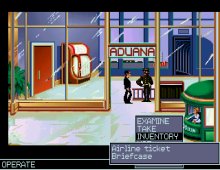