"One of the best fanmade remakes ever made, Imogen is a great Windows version of a huge, and highly underrated, adventure/puzzle gem from Michael St. Aubyn of Micro Power. As the remake authors describe, ""Imogen is an animated adventure game in sixteen sections; Each section contains a number of puzzles based on a particular theme. It is not possible to be killed off although the number of times you can change character has been limited. The number of permitted changes is given at the top-right of the screen. [The plot:] When the townspeople of Egmain were besieged by a monstrous firebreathing dragon they called for the assistance of Imogen, a local wizard with powers of metamorphosis. Responding to their pleas, he transformed himself into a dragon even more powerful than the real one. The monster was quickly destroyed but the strain of the transformation was so great that when Imogen returned to his normal state, his mind snapped. He forgot his friendship to the townspeople and used his power to destroy their crops, burn their houses and fill the sky with black clouds so that the town was in permanent night. After a few weeks of this, a spokesman set forth to seek the advice of the greatest and wisest wizard in the land. When the Great Wizard had heard the story he said, ""This insanity will pass, but until that time he must be imprisoned. I shall design a cave to hold him and your craftsmen will construct it in the mountain that overlooks the town."" ""How will we know when to release him?"" asked the spokesman. ""He will free himself when the time is right. I shall provide the spell for his release and split it in twain four times. The sixteen pieces will then be placed within the cavern and the route to each guarded by a test of stamina and intelligence. Only when he is fully recovered will he be able to retrieve the entire spell and set himself free"".

And so the cavern was constructed, and with the Great Wizard's help, Imogen was secured within the first section, ready to begin his quest for freedom.""

The ability to morph into different characters - including a monkey and a cat - is a clever idea that makes the game ahead of its time. Many of the puzzles requires you to switch characters to solve, not unlike Infocom's Arthur. This remakes is very faithful to the original, sporting colorful characters, excellent puzzles, and an intuitive mouse-based interface. If you enjoy clever adventure games that focus more on physical puzzles than inventory items, Imogen will glue you to the screen until the quest is over. Highly recommended!" 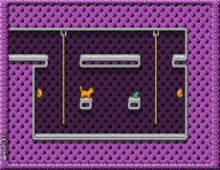 People who downloaded this game have also downloaded:
In The Dead of Night, Igor: Project Uikokahonia, James Clavell's Shogun, Jinxter, Lost Files of Sherlock Holmes 1 (a.k.a. Case of the Serrated