There are still witches in Aquitania. Centuries ago they did great harm until the good sorcerer Turani created a bracelet that gave magic luck to the inhabitants of Aquitania. No one was injured or bewitched anymore. All the bad magic of the witches was under the spell of the bracelet. Only the green magic (for playing practical jokes if the worst comes to worst) remained. But the witch Janedor wants to get back the old power. With the help of some unsuspecting inhabitants, she broke the Bracelet of Turani into pieces and hid the parts. Now Aquitaniaīs running out of luck, because the witches have regained their powers. Your job, of course, is to find all those darn pieces...

Jinxter, the third adventure from Magnetic Scrolls, continues the company's reputation as one of the most inventive creators of interactive fiction. The eccentric feel to the game starts from the packaging. The stylis box bears the title "jinxter" (sic) written in colourful letters, above a pretty picture of a carousel. The signifance of this carousel becomes apparent when you dwelve deeper into the game's plot. Opening the box reveals an assortment of items that rivals Infocom's in terms of "freebie" quality: a floppy disk containing the game, a copy of a fictional newspaper called "The Independent Guardian" which doubles as a game manual, a standard registration form, and a beermat.

Literally, the game is simply brilliant. All the descriptions of places, things, people and events are long, some taking several on-screen pages. All of them are written with tongue-in-cheek humor that fans of the Monty Python will appreciate. For example, at the start of the game, you are about to get run over by the bus you took to get a ride home. Just as you are about to die, you are saved by your guardian angel. He tells you the background story of the game. "I never get home to see the wife and kiddies", he says. "Mind you, can't stand the sight of the wife and kiddies, so I guess it's not so bad", he later adds. This is just a small example of the witty, quaint eccentric humor sprinkled throughout the game. The parser is much improved over the already excellent one in The Pawn and Guild of Thieves, and understands multiple sentences, pronouns, "all" and "except" constructions, and more. The puzzles, as usual, are very imaginative, and there is no maze in sight-- a great feature common to all Magnetic Scrolls games that really attests to their mastery of the genre. The plot is not as solid as The Pawn, but it still sports plenty of fun twists and a host of colorful characters. As with other Magnetic Scrolls games, Jinxter is another must-have in any IF fan's library. 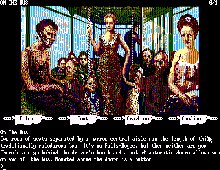 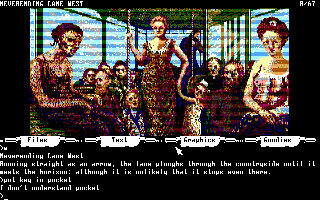 People who downloaded this game have also downloaded:
Leather Goddess of Phobos [Solid Gold], Hitchhiker's Guide to the Galaxy, The, Pawn, The, James Clavell's Shogun, Lost in Time