Definitely one of the "Finest Hours" of the British interactive fiction scene, Magnetic Scrolls' first release The Pawn was an instant sensation in Europe when it was first released by Rainbird in 1987, and instantly earned its the developer the moniker of "Europe's Infocom." The PC version, not surprisingly, fared much worse than the Commodore and Amiga version due to inferior graphics and almost nonexistent music.

The game is off to a good start with an imaginative fantasy plot. After being knocked out on the way home from the market, you awake in the magical land of Kerovnia, with a silver band clasped around your wrist that cannot be removed. Your goal is to escape Kerovnia, where a general election is about to be held to decide whether King Erik will continue to reign. A dwarf, whose campaign pledge (to cheers of adventurers worldwide, no doubt) is to "rid dungeons of mazes of any sort" is running against the King. Other locals you'll meet are Kronos the Magician, a Guru on a hill, and a Dragon, all of whom are very well-written and memorable in his or her unique way.

If you've never heard of Magnetic Scrolls, or a parser that not only rivals but surpasses Infocom's in many respects, you are in for a pleasant surprise with The Pawn. With a 3,500-word vocabulary, it understands adjectives, pronouns, and two interpretations of the conjunction (instead of just one as with most parsers). How many games could handle this sentence: "Get all except the cases but not the violin case then kill the man-eating shrew with the contents of the violin case."? The parser outdoes Infocom's in the number of multiple commands it can deal with in one go: 32. In fact, the only feature of the (late) Infocom parser that is missing here is the "oops" feature (if you've misspelled or used an unknown word in a command, such as "get the yellow frob," you can say "oops frog" instead of retyping the entire command).

But even the world's smartest parser is just a bunch of bits and bytes unless it's put to work inside a good game, and fortunately, The Pawn delivers in spades.The game wraps a well-honed prose, great graphics (even though they are grainy in the PC version), and scores of puzzles - some diabolically difficult, others deceptively simple - in a fun story that unfolds as you progress (you won't learn the significance of the game's title until later in the game). Most puzzles are object-oriented, and there are dozens of things to juggle while figuring out how and where to use them. If you get stuck, the game's on-line hint feature doles out graduated hints, similar to Infocom's Invisiclues hintbooks. Purists who don't want graphics to get in the way of their imagination can turn them off, to no detriment to gameplay, since most scenes are described in great detail, ofen with a wry sense of British humor.

With a great plot, outstanding parser, and many imaginative puzzles bound to keep adventurers up late at night, The Pawn is a revolutionary step in interactive fiction, a pioneer in the field that just no IF fan should pass up. Magnetic Scrolls even includes a thick, well-written novella "Tales of Kerovnia" that sets the stage to the game. A must-have! 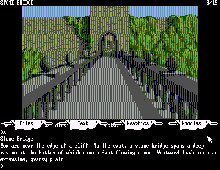 People who downloaded this game have also downloaded:
Magnetic Scrolls Collection 1, Maniac Mansion Deluxe, Out of This World (a.k.a. Another World), Realms of The Haunting, Sanitarium