Almost as good Heimdall 1 was almost as bad is Heimdall 2. I don't think they should ever have made a sequel to Heimdall 1. The graphics and interface is pretty much the same.

But the story in the game is absolutely not good at all. Not only is it too boring, but its also very easy to predict what will happen and what you have to do. Heimdall 2 doesn't' have the same atmosphere as Heimdall 1. Overall not a very good game, but I can recommend it to you if you a re a very big fan of Heimdall 1 though.

"Heimdall returns to your screens again with another Loki battling escapade. For those unfamiliar with the original, Heimdall 2 also uses a 3D isometric perspective, with a point and click system. This time, Loki is determined to get his revenge on his arch-enemy Heimdall, who defeated him after Loki stole the weapons of the Norse Gods Odin, Thor and Frey. Sporadic attacks across the realm have alarmed the Gods, and Odin sends his son Baldur to deal with them. Unfortunately he is unsuccessful, and all is lost until Heimdall volunteers to return to a mortal state to deal with Loki on a more personal basis, not only to retrieve the weapons of the Gods, but the amulets, talismen and Ro'Gelds (sources of magic) that are scattered throughtout the various worlds. Excpet this time he is assisted by a Valkyrie known as Ursha. Hence Heimdall 'II'.

A rather complex background in itself leads to a simple general plot: Collect the Ro'Gelds, amulets and Talismen and don't get killed. The addition of another character with slightly differing statistics is supposed to be an aid, but you may find yourself simply using it to store items you pick up. Rather standard RPG fare then: Increase your statistics by practising combat and magic, fight various creatures and delve into various sub-plots that make up the whole. You are gently eased into the game with your first puzzle - in this case, two warring villages that Loki has confused into believing they are at war with each other. Fairly simplistic in itself, though it doesn't actually sound that interesting.

What you are presented with however is actually a very pleasant gaming experience: bold, colourful and well detailed backgrounds and sprites are extremely well animated, it is clear the designers have spent a lot of time developing the artwork.... The sound is very good, the sound effects adding realism to the game and the in game music is of a similar quality. Though I found it could get a little annoying at times, it didn't detract from my enjoyment of the game.

In all I highly recommend this game to anyone, no matter their gaming preference. If I were to be truly objective, I would say that those obsessed with standard RPG style games should perhaps avoid this as it hasn't quite the depth of say, Ishar. But otherwise I consider this to be a well constructed game and should certainly be on any gamers list." Overall, Heimdall II is a fun game that combines elements of action, adventure, and RPG genres into a consistent whole, and provides a strong platform for Livil Divil Deluxe, the third and final game from Core Design based on this engine. 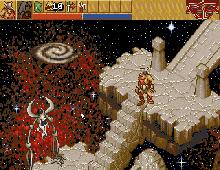 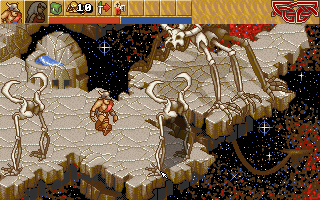