Heart of China is an excellent and most cinematic of the adventure game trio designed by Dynamix' Jeff Tunnell (the other two being Rise of the Dragon and Adventures of Willy Beamish). Set in the exotic Orient in 1940's, you are pilot/mercenary/wannabe romancer Jake Master who are hired by beautiful nurse Kate's father to rescue her from the clutches of a powerful Chinese warlord.

What makes this game so riveting and revolutionary (though sadly almost noone noticed it) is the true replayability that was often mere lip-service in other games: while the game is linear in a sense that you must do A before B and so on, Jake has a... escape sequence, using a 3D engine that was obviously taken directly from Damon Slye's simulations. The dexterity-impaired adventurers (like this reviewer) will be relieved to hear that the game, like its predecessor Rise of the Dragon, mercifully awards you a win of the sequence after a number of failures, so you can get on with the game and Jake's future escapades. 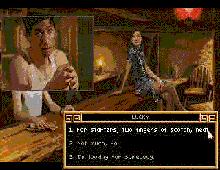